The NFL and Linear Optimization

If you’re a football (the real kind, not soccer) fan, you’re well-aware of the yearly schedule release. At some point between April and August, the regular-season schedule for each of the 32 teams is released. Fans and pundits immediately begin analyzing it and making predictions about the upcoming year, and the 95 billion dollar football gambling industry is officially kicked off. What you might not have thought about is how computation goes into making those schedules a reality!

Let’s talk about what needs to happen in an NFL team’s regular-season schedule. First, note that the NFL is split evenly into two conferences: the American Football Conference (AFC) and National Football Conference (NFC). Each conference has 16 teams (half of the total 32 in the NFL), which are then each split evenly into four divisions: North, South, East, and West. Each division, therefore, has four teams in it.

A team’s NFL schedule must have the following properties:

There’s even more that makes this extra complicated:

…there’s plenty more, and this is just talking about scheduling the match-ups themselves, and completely ignores all of the work that goes into time and date scheduling!

From a human-work perspective, this is immense! Each week, there are 32 choose 2 possible combinations (it’s not 322 because it’s a combination, not a permutation), for a total of 496. That’s compounded on each week, so we have 49617 theoretical schedule possibilities for a year. Even if our program somehow only takes 1 microsecond to calculate, it will take literally forever (much, much, much longer than the lifespan of the universe). How do we handle a problem on this scale?

Luckily, there’s a whole branch of mathematics that’s perfect for this kind of problem called linear optimization (or linear programming, if you like). The idea is that we create constraints, which define what must happen in order for a solution to be considered, given some input data. That will create a space of possible solutions, and then we can analyze only the possibilities that are actually feasible. We’ll use a simple example problem to explain how it works, and then we’ll show how the NFL uses it to help them schedule.

You could solve this conventionally with algebra, but let’s take a linear optimization approach. First, set your variables:

We have some constraints, converted from the word problem into math:

With these functions, we can now plot them on a graph, as you conventionally would: 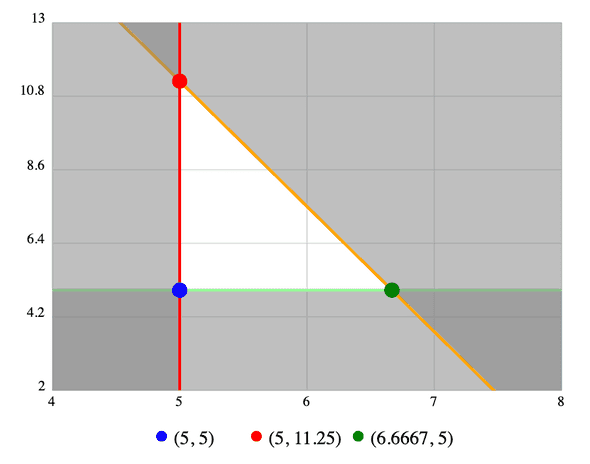 Notice how the set of constraints we defined create an area — we call that the feasible region. Anything in this area is a solution that would be acceptable given the constraints, but not necessarily optimal. Now that we have this, we’ll define our optimization equation. In this case, we want to optimize profit:

All we have to do now is take each vertex (each corner, shown by dots in the problem) and plug their x and y values in. The highest value wins! In this case, we find that the best we can do is 5 pizzas and 11 hamburgers, netting us a total of $176.

While this result isn’t particularly mind-blowing, it shows how we can use a linear perspective to view our data in a new light, then use an optimization function to decide what in a set of potential answers is the best of them. Let’s jump back to the NFL to look into a little more.

Like before, we’re going to have to set up our constraints. In this example, we actually have our constraints already defined for us under the “must have…” list above! For example…

At this point, we have a relatively limited number of acceptable solutions in our feasible region (each vertex within the multi-dimensional plane). The amount of possible answers depends on how the constraints are set up, of course, but it seems likely that there are a reasonable number of them, likely enough for a human to manually look through (or at least, to run other programs over for quantification). In addition, because we know every schedule is compliant with our constraints, we can use concepts that are hard to quantify, like “gut feeling”.

That said, in the interest of moving this concept over the goal line, let’s try to find a mathematically optimal solution. Similarly to before, we’ll need to check each vertex against an optimization equation, which is just a function run over each vertex in our feasible region. In our case, perhaps we’ll optimize for teams with close records, to make the games interesting. We might need a secondary optimization equation, in case multiple schedules are tied, but we’ll likely come out with a single schedule — the new schedule for the entire NFL.

In real life, the NFL does something like this using Gurobi (a library for linear optimization), lots of secret constraints, and a healthy amount of human checking. Linear optimization is also heavily used in other scheduling problems (like school classes) and in multivariate analyses.